A few months ago, on my first winter as a snow bird, I found myself searching for a quilt project to work on. The challenge was that fabrics were limited, and I did not have a huge space in which to work.

I downloaded an ebook by Elizabeth Barton, VISUAL GUIDE TO WORKING IN A SERIES. I have admired her work, and this book inspired me to work on some ideas that had been percolating for quite a while. In 2013 an unattended freight train broke away, and derailed in the downtown area of the town of Megantic. The fire and explosion that resulted destroyed over half the downtown area, and 47 people were killed. The images from that disaster were riveting, and led to me searching out other train wrecks.

These images became the basis for a group of mini-quilts on the subject. I simplified the images, and used the quilting to emphasize direction and movement. Here is a photo of them on display at Quilts at the Creek in Toronto this summer. 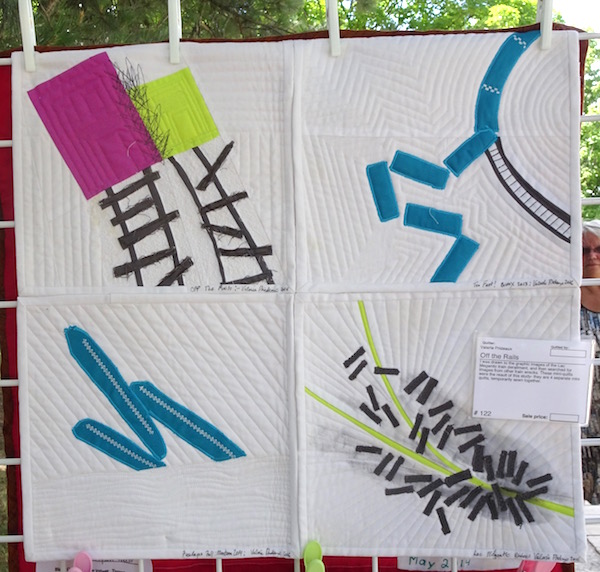 Top left: Off the Rails: Heavy rainfall washed out bridges that kept these trains running on separate tracks.
Top right: Too Fast: This train was going too fast around a bend, outside of New York City, and derailed.
Bottom left: Fuselages Fall: A train which was carrying several airplane fuselages derailed, and the fuselages slid down the mountainside into the river below.
Bottom right: Lac-Megantic, showing the burn area and burnt out rail cars.

Off the Rails was on display at the Juried Exhibition of Fibre Art at the Art Gallery of Burlington September 8 – 18th 2016.